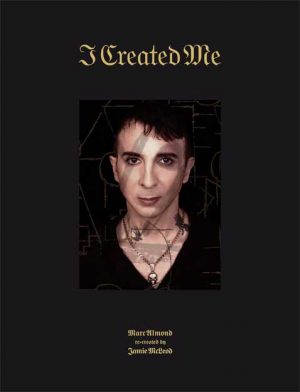 I CREATED ME – Jamie McLeod

The book contains largely unseen photos from Jamie McLeod’s 20-year-old archive, working with Almond as his muse, patron and friend.
It contains mostly unseen images completely reworked to create a whole new dream-sequence of imagery. McLeod spent more than a year working on the imagery to create stills with a cinematic feel, spiced up and sliced up for the imagination to go wild with. The other aspect of the book is what McLeod calls his B-sides, the less commercial images, that perhaps are the most revealing and intimate, showing off Marc’s persona in the realm of physical theatre and as the eternal exhibitionist. Performing in what McLeod calls ‘imaginary operettas’, creating a space where Marc can role-play and invent various personas both in the studio setting and on the street. There’s a large section of new portraits of Almond, inspired by the ‘Marc and the Mambas’ reformation for the Meltdown show in 2012 with various images McLeod made as stage projections for the show. A series of exotic mug shots with masks, tainted, tinted and distressed portraits using shadow-play and poetry, drenched in voodoo and varieté, evocative, tantalizing imagery of both glamour and sin, using the street as the gutter, to marvel at the stars. The book is equally tailored for the hardcore Marc Almond fan as it is for the aficionados of innovative, modern portraiture. Interspersed with the magnificently reproduced photos are short stories and texts by Marc’s most important collaborators. A stellar cast from his extensive 40-year career by the likes of Dave Ball, Anohni from ‘Antony and the Johnson’s’, Matt Johnson of ‘The The’, Jim Thirlwell from ‘Foetus’, Lindsay Kemp, Othon, Anni Hogan, Val Denham, Siouxsie Sioux to name but a few.